Biography of the Forged Artists

The artists whose biographies can be found below are the artists who got hit the hardest by the large number of forgeries. A short overview of their lives is provided here to give some extra context to their work. 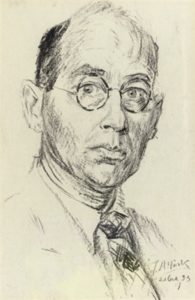 Jan Altink was born in 1885 in Groningen. In 1900 he started his education at the Minerva Art Academy as an evening student. During his studies, he would prove a most talented student, which also showed in the large number of prices, testimonials, and medals he won. During these years, he made a living by teaching drawing-classes in different cities, as well as being a decorative painter.

Altink was one of the five founding members of The Plough, a name that he himself had come up with. In May 1921 he would take on his first executive role within The Plough as secretary, a function he would take on again in May 1922. Altink published a large number of his drawings in The Plough magazines. The 1924 publication Teekeningen, for example, contained six of his works. He also drew and engraved the first two front pages of Het Kouter.

Altink began to teach model-drawing at the Minerva Art Academy in 1925, which resulted in a permanent position from 1933 onwards. Besides being a teacher, he acted as curator for The Plough exhibitions. In 1926 he became the treasurer of The Plough, as well as part of the group’s daily management. Under his management, the decision was made that The Plough would from then onwards curate their own expositions outside of Groningen. He was also part of the preparatory committee for the big 15-years’ anniversary exhibition.

Altink married Nelly Hubbeling in July 1930. After the war, he continued his work as a teacher at Minerva. In 1955 he received the cultural award of the municipality Groningen for outstanding work done for the Groninger art scene. Altink passed away late in the evening of 6 December 1971, in the Academic Hospital of Groningen. 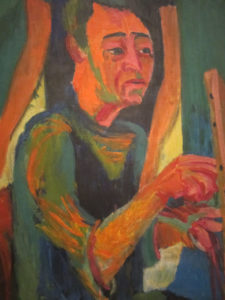 Johan Dijkstra was born in 1896 in Groningen. He studied for three years at the Higher Civic School (HBS) in Groningen, during which time, in February 1915, he started taking two courses per week at the Minerva Art Academy. During his last year at Minerva, in 1918/1919, he won the bronze medal in the category of drawing from sculptured and living models. After The Plough was established, Dijkstra would become its first secretary.

In 1919 and 1920 he would become slightly less involved with The Plough, as he went to study at the State Academy for the Visual Arts in Amsterdam. During these years he made a living by illustrating advertisements. After his stay in Amsterdam, Dijkstra would return to Groningen and become fully reconnected with The Plough. In November 1924 Dijkstra was presented with the opportunity to publish in Het Kouter. Besides his visual contributions, he also published several articles on art titled Kanttekeningen. In this period the interest in his work also grew outside of that of The Plough. In November 1924 it was announced that he would expose with the Antwerp Lumière, and in 1925 that he would have an exhibition of ‘graphic experiments’ at the town square of Scholten.

In January of 1926 Altink proposed that The Plough pursue a more active role as publisher. This proposal resulted in the book De Ploeg Groningen Holland, published in 1927. From 1930 onwards Dijkstra was mostly active as a monument artist. However, he also became an art critic for Nieuwsblad van het Noorden. After the war, he would continue these endeavors, which resulted in worldwide projects, and a representation at the Venice Biennale.

During the last years of his life, Dijkstra became depressed. After the death of his wife Marie, he would be seen roaming the streets of Groningen. His unhappiness also showed in his art critiques, which increasingly hardened and resulted in the loss of many friends. Dijkstra died on 21 February 1978 in Groningen. 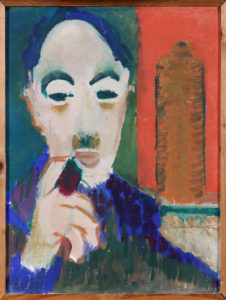 Hendrik Nicolaas Werkman was born in 1882 in Leens, near Groningen. He studied to become a printer. In 1907 he would get his own printing shop, a small establishment in Groningen, which would grow to employ around 20 people at its height. Werkman would become known as the printer of The Plough. He was responsible for printing The Plough leaflets, catalogs, and invitations. His role as the printer of The Plough would also lead to him becoming the printer of the book publications of The Plough, which started with the magazine Blad voor Kunst (1921). Shortly before the Second World War, Werkman would become acquainted with Willem Sandberg of the Stedelijk Museum. It was through Sandberg that Werkman would receive numerous commission for the Stedelijk, as well as his first solo exhibition in 1939 in Amsterdam.

During the Second World War he would become one of the main publishers of De Blauwe Schuit, a publication in which, in covered terms, the Nazi regime was critiqued. His best-known work, the double series De Chassidische legenden, stems from these publications. Near the end of the war, in April 1945, Werkman was shot, alongside nine others, by SD-member Peter Schaap in an effort by the SD to destroy any evidence and witnesses against the Nazi regime.

Werkman would receive numerous posthumous honorations such as the Werkman College, a school that aims to keep his artistic legacy alive, as well as the H.N. Werkmanprijs for graphical design.

Jan Wiegers was born in 1893 in Kommerzijl. He started his education at the Minerva Art Academy, but would soon change to the Royal Academy of Visual Arts in The Hague and The State Academy in Rotterdam. Wiegers was one of the five founding members of The Plough. His biggest influence on the later developments of The Plough was his meeting with Kirchner in Davos, where he resided in a sanatorium for his consumption. This meeting resulted in him introducing international expressionism to the work of The Plough.

In 1934 Wiegers left Groningen and The Plough for Amsterdam. After WWII he became a Professor at the State Academy for the Visual Arts in Amsterdam. Soon after, he was granted a knighthood in the Royal Order of Oranje-Nassau, as well as Officier d’Académie Française. Wiegers exhibited internationally, his biggest achievement being an exhibition at the Venice Biennale. He died on November 30th, 1959 in Amsterdam.