You are here: Home1 / Economics2 / Price-index

On this page, an overview is presented of the price developments of The Plough artworks in the period 1990-2017. The aim of this is to show how forgeries can destroy the market for a particular artist. The price developments are based on auction results of oil and watercolor paintings.

In the two subpages, a short written analysis is made of the overall sales of the four artists from the period 1990 and before, as well as 1990 and after.

As can be seen in the graph, the price of Altink’s work drops after the dismissal of the criminal case against Cor van L. The significant amount of negative press surrounding his oeuvre in 1995, as well as the release of the alleged forger, have a visible effect on the monetary value of his work. In the following period, the prices slowly began to rise again, showing a regained trust in works by Altink. However, this trust evaporates again after the Lower Court’s ruling regarding the Second Altink Affair. The ruling of the Court of Appeal can be viewed as the final nail in the coffin. Altink’s oeuvre received much negative press after the Lower Court ruling. The market for Altink’s works has not recovered since this fall in 2008. The repeatedly negative attention in the press has had a disastrous effect on the market value of works by Altink. 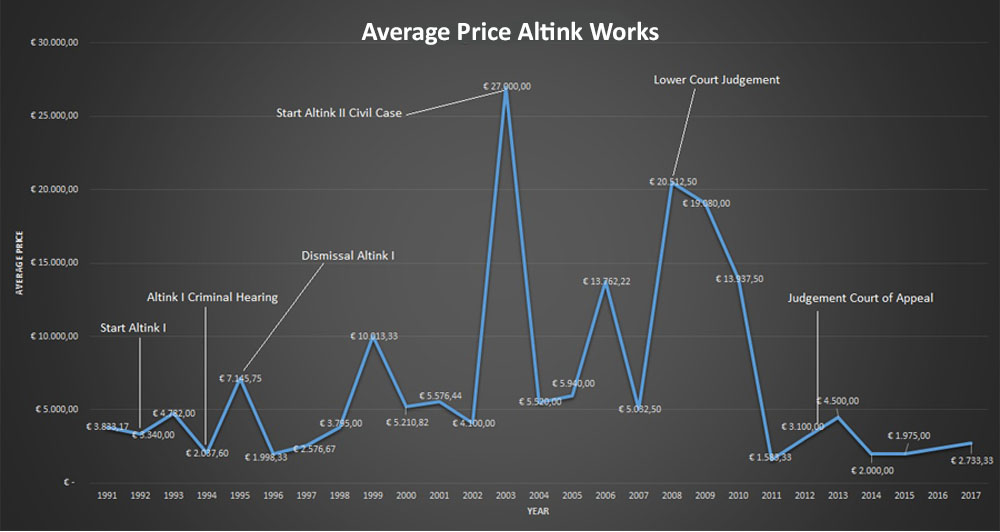 The most obvious connection between the forgery cases and the price of Dijkstra’s works are best seen in 1995, after the dismissal of the Altink I case. The average price went from over € 22.000 to only € 3.423 in 2 years’ time. In the period 1998-2000 the prices seemed to recover, only to drop to the all-time low of an average of € 2.000. It took two years for the prices to somewhat recover, only to drop again after the Lower Court ruling. After the Court of Appeal verdict, the prices, however, seemed to stabilize with the exception of one big spike, due to a major sale. Although the forgery cases’ influence can definitely be seen in the average price of Dijkstra’s work, it was not as disastrous as it was for the work of Altink. 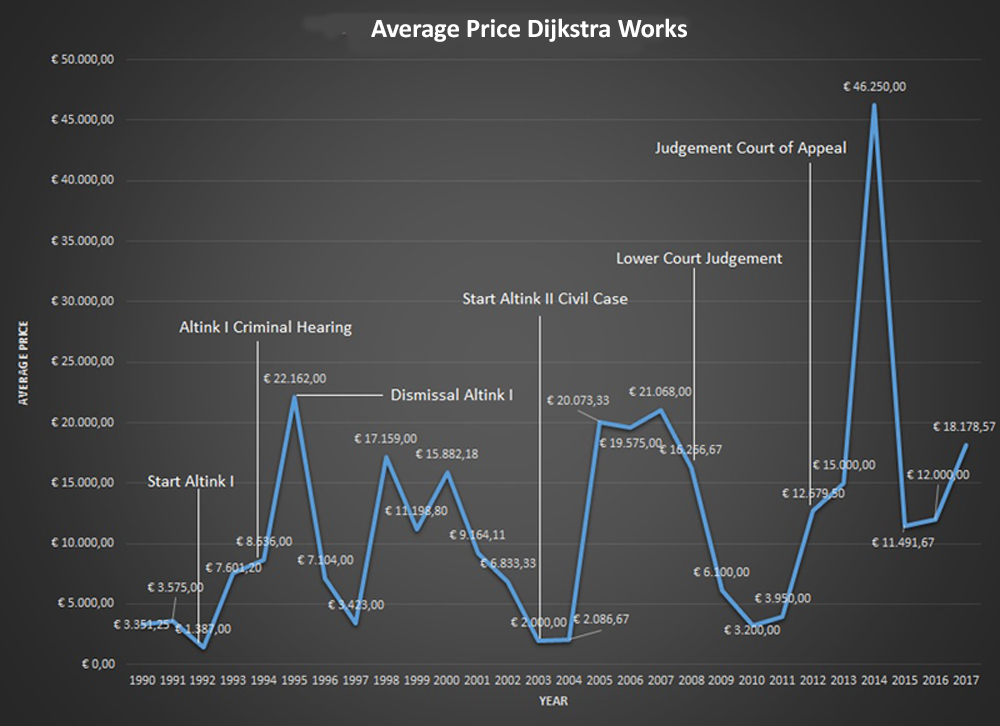 It is hard to draw conclusions from the average price of Werkman’s works; it fluctuates significantly. This is largely the result of his work being mainly prints available in multiples. His paintings, and a few of his print series, fetch very high prices, which accounts for this roller coaster of a graph. In years when one of these valuable works was auctioned, the average price rises, only to fall again in the years when there were no sales. As a result, no real conclusion can be drawn with regard to the influence of the forgery cases on the price of Werkman’s work. 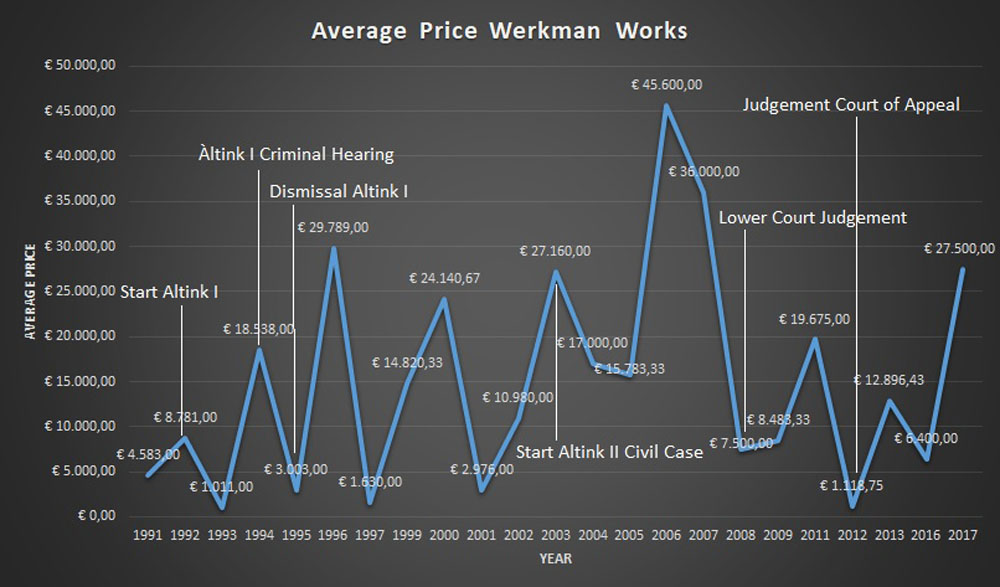 The influence of the forgeries on the work of Wiegers before the year 2000 is hard to see, as the price is relatively consistently low. It is remarkable, however, that in the 90s the price is so low, as the average price will rise significantly after 2000. After 2000, the prices rise steadily, although they plummet between 2010 and 2011. The big peak of 2008 is largely due to a sale of over € 200.000, and the drop between 2008 and 2009 should be seen in light of this information. It’s remarkable that the impact of the Court of Appeal judgment is not immediate – as was with Altink – but that instead there is a steadier decline from 2014 onwards. The effect of the reduced confidence in The Plough works after the Court of Appeal judgment can be seen in the average price of Wiegers’ works.

For the graph showing the developments of the forged The Plough artists combined, the graph of Werkman has been discarded, due to its previous explained inconsistency. If we look at the combined graphs, a pattern emerges of negative press, or other events directly correlating with a drop in the average price. After the dismissal of the Altink I case, a drop can be seen, as well as after the start of the Altink II case and the Lower Court judgment.

Each time the market for The Plough artworks seems to recover, it gets knocked again down by a negative event. After the judgment of the Court of Appeal, this rule doesn’t seem to apply. But the height of the average price in those years is largely due to some major sales of Dijkstra’s works. Still, a drop is noticeable here, albeit delayed.

Most interesting, however, is the fact that Dijkstra and Wiegers still have major sales after 2012. If we compare those with the average value of Altink sales, we can see that after 2010, the average price of Altink’s work does not rise higher than € 5.000. The second Altink Affair seems to have killed the entire market for Altink artworks. Forgeries thus not only hurt those who buy a fake, but also those who own genuine works, as the value of those works decreases significantly.

As an objective point of reference, the global conjuncture of the results of auction houses over 2005-2015 has been included. The decline that can be seen in the average market price of The Plough works is contrary to the global upward – and largely steady – conjuncture.[1] 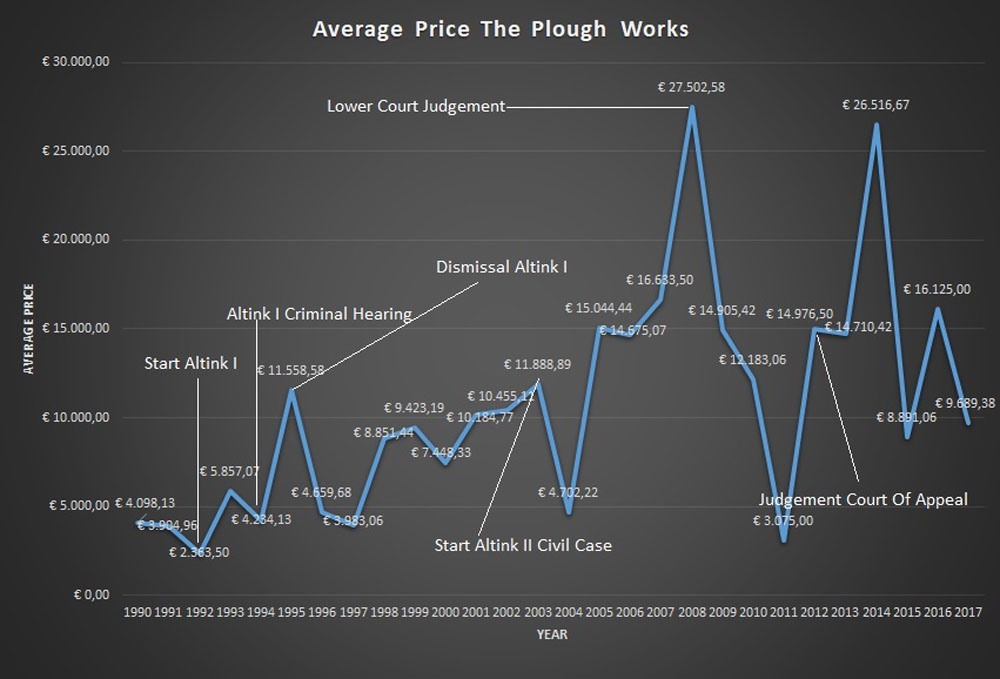